As a 20-year-old foreign exchange student living in Italy, Amanda Knox was unfamiliar with the plight of people wrongfully convicted of crimes they did not commit.

The 2007 brutal rape and murder of her roommate, combined with a botched police investigation and prosecution, changed Knox’s life forever. Knox spent a year in prison before charges were filed and almost four years behind bars before an Italian court acquitted her of murder.

Knox, now 33, and living in Seattle with her husband, recounted her story on Thursday in an interview with Lauren Kaeseberg, legal director of the Illinois Innocence Project.

The conversation was shared in a virtual fundraising event for the IIP.

An aggressive media spread misinformation about 21-year-old Meredith Kercher’s death. Local politicians felt pressured to solve the salacious crime that was highlighted in media reports across the globe with headlines blaming “Foxy Knoxy” for the death.

“I never ever thought something like this was remotely possible,” Knox said of her experience. “It was a perfect storm of things that went wrong.”

Unable to speak Italian fluently, Knox struggled to understand authorities during more than 50 hours of interrogation. She was separated from her boyfriend Raffaele Sollecito, who also was charged and later acquitted of murder.

The legal process in Italy allowed Knox’s case to move through three levels of review in about three years – far faster than the decades similar cases take in the U.S., noted Kaeseberg.

Knox returned to the U.S. in 2011 after an acquittal by the Italian Supreme Court of Cassation.

Without the protections against double jeopardy afforded defendants in the U.S., Knox was convicted again in 2014.  The new charge created fear and uncertainty about a possible extradition.

“I was living like a hunted animal, trying to find out if I was going to get my life back,” said Knox.

Relief came in 2015 with acquittals for Know and her former boyfriend. Rudy Guede was convicted of murder after DNA linked him to the crime. He was recently allowed to complete his sentence with community service, a decision that has outraged Knox.

During her years in prison, Knox drew strength from her family and supporters in the U.S.

Her parents took turns traveling to Italy for the eight hours of visitation allowed inmates monthly  in the prison.

The impact of incarceration on families is one thread in the fabric of loss experienced by innocent people waiting to be exonerated, said Knox. The limitations in place during the pandemic have made a bad situation worse for detainees, she said.

“It is deeply troubling to me. I can’t imagine what it’s like to be prison right now,” said Knox.

Knox, author of Waiting To Be Heard, actively supports innocence organizations, a movement that did not exist in Italy at the time she was charged. Her work on behalf of innocent people “is a way to make the best of a bad situation.”

In 2020, The Illinois Innocence Project was successful in securing the release of five wrongfully convicted individuals.  The list of 17 exonerations secured so far by IIP represents 350 years of life lost behind bars. 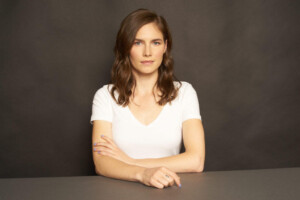